1) Rules and methods of token distribution among project founders, participants, users and investors
2) Statistical distribution of the token among all token holders

1. Rules and methods for token distribution

When a new token is issued and token economy of a project or organisation is planned, a decision (or rather set of rules normally implemented into smart contracts) has to be made on how the token is going to be distributed.

Two different types of distribution can be distinguished with some projects (such as Bitcoin without genesis distribution) only relying on one of them, however nowadays most projects and blockchain networks combine both:

(1) Genesis token distribution – how the tokens are distributed prior to or during initial token offering. At this point normally the founders, marketers, early investors and other early participants can acquire the token at no cost or at significant discount in exchange for their early support of the project.

(2) Ongoing distribution – this refers to token acquisition and distribution mechanics during the ongoing operation of the blockchain network or DLT based project / system. Depending on implementation this will impact how users and other system actors such as miners, validators and investors can earn or acquire tokens beyond directly purchasing the tokens from other holders. Related here would be staking, mining, useful work or any other actions and work contributing to the success of the project.

2. Statistical distribution of the token during operation

Current token distribution among token holders is a useful metric of network and token economy health. This is applicable for mature projects post genesis, when secondary has operated for some time and tokens are being distributed, changing hands and issues as part of normal network project operation.

We call it a useful metric but there is no rule or law set in stone here saying, for example, that there should be normal or Gaussian distribution, that “wealth” denominated in tokens shall be distributed more or less evenly etc. In the real world the wealth is not distributed evenly, the same applies to blockchain network based projects.

An interesting example of uneven token distribution that in Bitcoin network, 4% of all wallets hold 96% of all Bitcoin, according to this infographics from Howmuch.net: 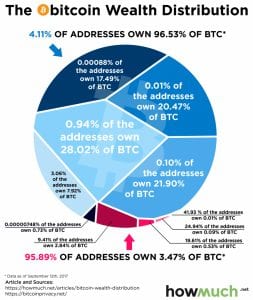 At the same time visual representation of token mass distribution without question provides for a useful snapshot insight into the current state of the affairs of a token economy based project.

This is applicable both for global cryptocurrency and token projects as well as smaller ICO and private blockchain projects. In Dappros Platform for example we visualize the overall ownership of each token by way of a pie chart. See example below taken from the dashboard section of typical Dappros Platform interface. The project owners can easily see how much of the token issuance is held by the organization (“Master”) crypto wallet and how much has been distributed to employees crypto wallets “Others”: 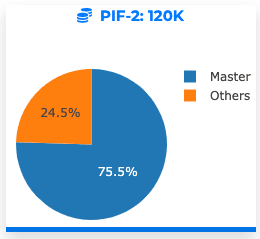