Dappros has previously prepared an analytical report on worldwide blockchain developers stats.
Our report has been widely republished by crypto and technology media and has become a subject for active discussion.

As definitely there is a worldwide demand for such data, we are continuing to look closer into blockchain developers data at a more granular level.

We are now looking under scope into countries which have come out in the top during our global data research.

The current granular report is devoted to the Republic of India.

India has displayed a controversial result in our global statistics research as:

1. It has come out as number 2 worldwide in terms of a global number of blockchain developers (12,509 during our research).

This clearly shows that whilst India is able to supply the numbers, there is a huge undeveloped potential for more higher-skilled specialized software engineers such as blockchain and DLT developers to emerge in the region.

Dappros global blockchain developers report therefore has sparked some serious discussions specifically in India with BitCoinExchangeGuide reporting, for example, that “CP Gurnani, the CEO of Tech Mahindra shared the sentiments put forth by Dappros. He stated that there is a “clear shortage” of competent blockchain developers worldwide and that “our present curriculum doesn’t allow for practicing much.”
(Source: https://bitcoinexchangeguide.com/dappros-crypto-study-shows-usa-1-and-india-2-for-number-of-blockchain-developers/)

India government currently continues to ban cryptocurrencies which clearly does not help with adoption of blockchain and distributed ledger technology in the region and sends a wrong message to educational bodies.

We have now looked into statistics of blockchain developers by states and largest cities of India to understand what the underlying distribution is and hoping to identify important trends.

We hope that our data will aid local and international companies in their decision-making and possibly can help public and private educational initiatives in planning new educational programs. Clearly, there is so much has to be done still by both sectors to satisfy the growing demand from both local and global outsourcing market.

Here we have looked into absolute numbers of developers by states. States of India are ranked by the total number of blockchain developers, in descending order. 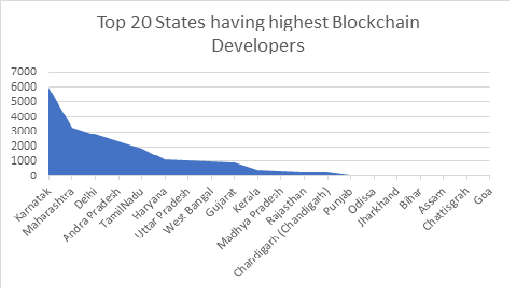 Karnataka, Delhi, Tamil Nadu, Maharashtra, & Andhra Pradesh are some Indian states that have been aggressively pushing the blockchain agenda, organizing hackathons and conferences on the topic and implementing blockchain-focused projects.ects.

Here we repeat the same exercise with cities. Absolute numbers data in Table 2 below: 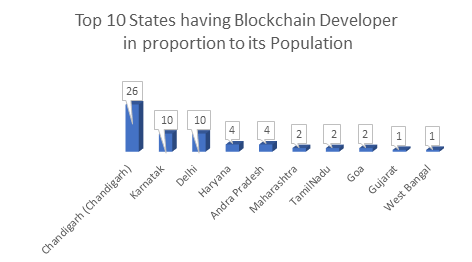 Here we repeat the same exercise with cities. Absolute numbers of data in Table 3 below:

States with the highest number of developers have joined hands with blockchain start-ups established abroad for implementation of blockchain in various fields, including e-governance, on a pilot project basis. The government too is interested to dig into this technology. 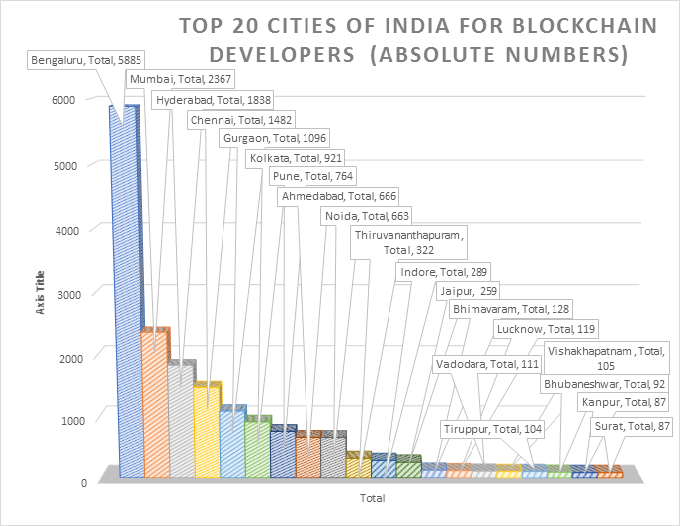 It is also interesting to look into India cities blockchain developers figures adjusted by their overall population size – Table 4 below.

Table 4. India cities ranked by their numbers of blockchain developers relative to population. 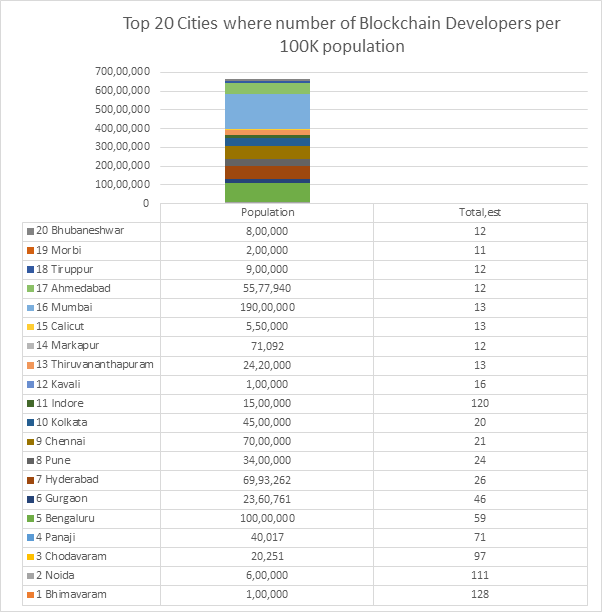 Seeing the need and popularity of blockchain innovation premium institutions like SP Jain and MIT have started providing courses. IBM is putting forth a free blockchain course for students. Numerous fintech companies are moving in the direction of educating future blockchain software engineers by offering training programs.

Telangana state is keen on taking the lead in the area of emerging technologies and has inked pacts with public and private institutions to set up the first comprehensive ecosystem – Blockchain District – that supports innovations in Blockchain technology in the country.

The state has a tie-up with C-DAC, IIIT-Hyderabad & Tech Mahindra to work on Blockchain Technology. Telangana government has also partnered with C-DAC in developing a pilot solution for the property registration system.

Dappros has contributed by opening an R&D unit in Mumbai, hosting a number of blockchain developer meetups and publishing online guidance such as Blockchain Developer Stats. We will continue to contribute to blockchain developers education in the geographies of our presence (UK, US, India) and will keep updating our publicly available online knowledge base. We hope that the results of our research will be useful by public and private sector organizations to maximize the impact of their educational efforts in the Republic of India.